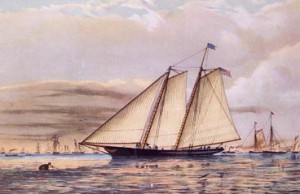 “Your Majesty, there is no second”
The year was 1851 and Queen Victoria, who was watching the race, asked “Who was in second” as the yacht America, in the lead, passed by the Royal Yacht. This yacht America was of a radical design for the times, the pointy narrow end was in the front and the widest part amidships.

Next race: September 18, 2022, pursuit weekend:
The Gosport Regatta is a destination pursuit race. Its history goes back to the Oceanic Cup that attracted 50 boats and included boats from England and of course the US at the Isle of Shoals.  In 1874 the US sailing yacht, America, won the race and became the namesake for the world famous America’s Cup.  The Gosport Regatta is a fundraiser for Piscataqua Sailing Association (PSA) and Star Island.  We are happy to announce that the race and after race activities are back on Star Island in 2022.

Gosport Regatta is a fundraiser for Star Island and the Piscataqua Sailing Association (PSA) to promote community, sailing and the New Hampshire Seacoast.  Updates will be posted on this website.

The Course: Starts about 1/2 mile or so outside of buoy 2KR and goes to Gosport Harbor at Star Island. Usually the first half of the race is a reach from 2KR to Gosport Harbor and second half is windard/leward legs out and around the islands.

The Fleets:
We have 4 fleets competing, two Cruising (non-spinnaker) and two Racing (spinnaker) fleets and the Classic Yacht trophy. The boats have ranged from an 18′ Cat boat, 50+ year old yawls, production cruising boats like Catalina and Hunters, cruisers-racers like C&C and Cal to racing boats such as J24, J105, J120 and J130.